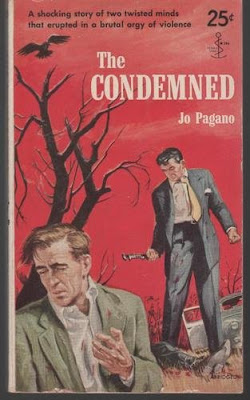 To understand THE CONDEMNED, Jo Pagano’s strange hybrid of social commentary novel and gritty pulp, a little background is in order. Born in 1906, Pagano was the youngest son of Italian immigrants who came to Colorado at the turn of the century so Pagano’s father could work as a miner. Jo quickly figured out that writing stories beat the hell out of swinging a pickax, and by the thirties he had started selling stories to magazines like THE ATLANTIC, SCRIBNERS, READER’S DIGEST, and YALE REVIEW. He moved to Hollywood, and by the late thirties, he was working at RKO Pictures.

Around this time Pagano became friends with the novelist William Faulkner. The great writer was in Hollywood doing script rewrites for Howard Hawks, but he spent most of his days chasing girls and getting shitfaced with other scribblers. At the time, Faulkner’s work was little read outside highbrow literary circles, but Pagano was already a devoted fan. Because Pagano could match the Mississippian drink for drink, the two men became fast friends. Faulkner became Pagano’s literary mentor and took special care to warn him about the hazards of selling out to Hollywood. Talent, Faulkner believed, couldn’t survive the compromises one had to make with the studios. He told Pagano simply, “Jo, you have got to get out of this town.”

In the midst of this tutelage with Faulkner, Pagano published his third book, THE CONDEMNED, in 1947. The novel was based on the true story of Thomas Harold Thurmond and John M. Holmes, who in 1933 had abducted and murdered a wealthy man named Brooke Hart. After the killers were apprehended and confessed to the crime, thousands of angry people descended on the Santa Clara County jail in San Jose, dragged the men from their cells, and hanged them from two trees across the street.

Pagano changed the names and turned the story into a serious crime drama. The central conflict is that of Howard Tyler, an everyman living in postwar California. He can’t find work to support his family, so he takes a job as getaway driver for a small time crook, and big time psycho, named Jerry Slocum. This decision turns out to be a catastrophic mistake because soon Jerry has decided that he and Howard need to move up the criminal ladder to kidnapping.

Neither of Pagano’s previous books—both of which were affectionate evocations of family life among Italian Americans—would have prepared a reader for THE CONDEMNED. This novel is a serious literary attempt to deal with Hart’s murder and the subsequent lynching of Thurmond and Holmes. As such, it marks a sharp departure from his previous books in terms of both focus and tone. It is also something of a swing for the fences in terms of style. It bears unmistakable Faulknerian touches such as shifting perspectives, shocking violence, and buried psychosexual motivations, but it also owes a debt to Steinbeck’s social consciousness. It was Pagano’s attempt to write a great, important novel. After its initial printing in hardback failed to bring literary glory, however, the book was radically abridged and repackaged as pulp (a process that would continue for years: Zenith Books re-released the book in 1958 under the title DIE SCREAMING).

The book isn’t entirely successful. Pagano’s weakness as a writer was preachiness. He gives us the character of Dr. Simone, an Italian professor who functions as the film’s moral and intellectual color commentator. This character mouths all of the appropriate leftist horror at the American financial and judicial systems. Moralizing in noir usually comes in the form of boring authoritarians espousing a rightwing point of view, but Dr. Simone’s sermons prove that preaching doesn’t work any better when it comes from the left. In many ways, the abridgement makes for a better read. It focuses more on the central story of the killers—in particular on Howard Tyler’s terrible guilt. After all, the key tension in the story is Howard’s gnawing sense of his own culpability, the tortured humanity of a normal man who fumbles into theft and murder and then watches in horror as his life falls apart.

Soon, Pagano accepted the job of adapting the book into a screenplay for producer Robert Stillman. The resulting film that Pagano and director Cy Endfield delivered, THE SOUND OF FURY, was a masterpiece, a dark and serious look at American society in the post-war era. Endfield rightly seized on Pagano’s strongest material and brought it to the front of the film. He also kept Pagano’s strong supporting cast of characters: crazy homme fatale Jerry Slocum, the careless newspaperman Gil Stanton, and Hazel, the odd young woman who exposes Howard to the police.

The film met with great opposition, with theater managers across the country catching flack for running such an “anti-American” picture at the outset of the Korean War. The film was re-titled TRY AND GET ME! and peddled around as a genre piece (much as the book had been), but it quickly sank into obscurity.

Stubbornly, the film lived on, and as film geeks rediscovered it, its reputation grew. It is now in line for a major restoration by the Film Noir Foundation. Pagano’s novel doesn’t have the same reputation that film the does, but this strange and beguiling work is well worth seeking out.

Great review, Jake. You have motivated me finally to read the 1947 edition I bought over 20 years ago (because it documents a true event in my home town). Also hoping to see The Sound of Fury if/when it's restored.