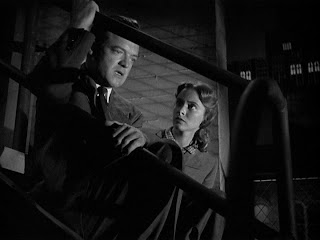 I know of no more underrated movie in the film noir canon than Fred Zinnemann’s Act of Violence. It is a masterpiece of the highest order, a perfect encapsulation of the themes and style of noir, and while it is not as well known as movies like Out of the Past and The Maltese Falcon, it is every bit their equal. A reassessment of this film is in order.

The movie begins with a man in a hat and trench coat limping across a city street at night. He climbs the steps of a flophouse, goes to his room and retrieves a .45 from a drawer. He checks the clip and slams it back into the gun. The title “Act of Violence” bursts onto the screen and we’re off and running without any further credits. The man is Joe Parkson (Robert Ryan). He’s on his way to find Frank Enley.

When we first meet Frank a few scenes later, he’s being congratulated by a civic gathering at the groundbreaking of a new housing division in his small California town of Santa Lisa. Frank’s a happy man, a war hero who has returned from overseas and made the best of the postwar American utopia. He’s got plenty of money and friends, a pretty young wife, and a healthy two-year old son. Things are going great, and then Joe Parkson gets to town.

I don’t want to say too much more about the plot, and I certainly don’t want to reveal much about Joe’s reasons for wanting to kill Frank. Their connection goes back to the war, but uncovering their shared history is pivotal to the viewer’s enjoyment of the film. Figuring out just how much of the darkness encroaching on this small town ideal is represented by Joe and how much of it is represented by Frank is just one of the film’s great surprises. Soon Frank is on the run. He runs up to Los Angeles with Joe quick on his heels. It is here in the LA section of the film that Act of Violence achieves greatness. It has been a compelling thriller up to this point, but in LA, as Frank’s history is revealed and he begins his descent into the seedy underworld in a desperate attempt to flee history's consequences, the film becomes a first rate drama.

Fred Zinnemann is an interesting director because while he was incredibly successful— with a shelf full of Oscars and a list of box office blockbusters to his credit—he is a guy who gets curiously little respect. The auteurist critics never gave him any love, with High Noon in particular coming under fire from partisans of Hawks and Ford who didn’t want to see anybody upstage Rio Bravo or The Searchers. Andrew Sarris, in his influential ranking of directors, The American Cinema: Directors and Directions 1928-1968, damned Zinnemann—along with John Huston and Billy Wilder—to a hell entitled “Chapter Five: Less Than Meets the Eye”.

While I’m in sympathy with the notion that popular success and industry approval are meaningless (my favorite director is Orson Welles, after all), I think Zinnemann has gotten a raw deal. A consistently intelligent and skillful filmmaker, he worked in many disparate genres and succeeded in most of them. With Act of Violence he pulls off the impressive feat of making a textbook film noir before any such textbook had been written. Most of the noir elements are here—the postwar moral ambiguity, the use of shadows and slanted angles, the daytime beginnings followed by the tumble into night, the guilt, the fatalism, Robert Ryan—and the film utilizes these elements to dramatize the essential noir theme of an ordinary man who must watch in horror as his sins catch up to him. Working with cinematographer Robert Surtees, Zinnemann employs the style of noir with such precision and maturity that Act of Violence almost feels like a conscious attempt to fulfill the promise of the genre. Many noirs have a still-evolving quality, bearing traces of studio convention or the vestigial elements of other genres, but Act of Violence is a completely realized noir from start to finish.

The story came from Collier Young, who had an instinctual feeling for the dark undercurrents of American society. He would later help his wife, director Ida Lupino, mine this territory, most notably in her masterpiece The Hitch-Hiker which, like this film, takes ordinary people and plunges them into moral chaos. Young, screenwriter Robert Richards, and Zinnemann all identified this plunge as the main thrust of Act of Violence. Frank Enley’s descent from sunny Santa Lisa to the dirty, dark streets of LA mirrors his fall from the protective façade of his current life back into the harsh realities of his past life.

Enley is played brilliantly by Van Heflin in a performance that requires him to hit just about every note you can ask an actor to hit: goodness, happiness, fear, sheer terror, despair, resignation. He’s given great support by Robert Ryan (as good as always), but Mary Astor just about steals the movie as a middle-aged prostitute who picks up a drunk and confused Frank and takes him back to her place. If you only know her as Brigid O’Shaughnessy from The Maltese Falcon, you are in for a surprise. This is the best performance she ever gave.

There aren’t many superlatives I have left to throw at Act of Violence, but I’ll give it one more: it is my favorite film noir.

Hi. I found your blog via that cracking story in Twist Of Noir. Top of the range!Cheers.Paul