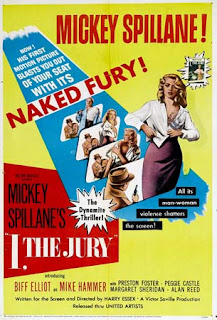 Legend has it that Mickey Spillane wrote his first Mike Hammer mystery I, the Jury in nineteen days. The novel immediately became a sensation, and Spillane churned out Hammer mysteries like a one-man pulp factory for the rest of the forties and fifties. The novels were graceless, violent and—by the standards of the time—borderline pornographic. Spillane sold over two hundred million copies around the world and made more money than the US Treasury. It didn’t take Hollywood long to come knocking on his door.

Of course, the most famous attempt to translate Spillane’s hardboiled vision to the screen was Robert Aldrich’s 1955 Kiss Me Deadly. It’s a noir classic. If you haven’t seen it, you should. It’s by far the best adaption of anything Spillane ever wrote. Having said that, however, you might also want to take a look at Harry Essex’s 1953 I, the Jury, Hollywood’s first crack at Mike Hammer. It’s not great art, but neither was any book by Mickey Spillane. In many ways, in fact, Essex’s film has more of the cheap flavor of a Hammer novel than does Aldrich’s more ambitious approach. While Kiss Me Deadly takes Spillane’s work as a starting point, I, the Jury takes it as an end point.

The movie starts off with a murder, followed by some credits bursting onto the screen. Hammer appears in the next scene swearing revenge. That’s the setup for a lot of Mickey Spillane’s work. Someone dies, and Hammer sets out to find and execute the killer. The construction of the movie follows the construction of the book. It’s up the viewer to decide if they want to take the time to try and untangle the plot. Essentially the story is a series of interviews. Hammer goes from one place to the next and talks to potential suspects. The suspects alternate between men like George Kalecki (Alan Reed) and women like the sexy psychologist Charlotte Manning (Peggy Castle). The conversations with the men invariably end in violence. The conversations with women invariably end in sexual innuendo. At the end, Hammer suddenly figures out who the killer is and carries out the execution.

The irrecoverable problem of this film is at the center. In a fatal bit of casting, Hammer is played by relative newcomer Biff Elliot in a charmless performance constructed mainly of barks and punches. Someone like Charles McGraw might have pulled off Mike Hammer this way and still injected a little personality into the character, but Elliot’s performance has as much personality as a headache. Since he is at the center of nearly every scene, nearly every scene has a problem.

Nevertheless, despite this setback the film itself isn’t half bad. It’s directed by a screenwriter named Harry Essex who had a deep involvement with noir in the classic period (he wrote, among other things, Phil Karlson’s Kansas City Confidential). He does what he can with Elliot’s limitations and milks as much as possible out of the rest of the cast (including a brief turn by Elisha Cook Jr. in a Santa Claus suit). The real MVP here, however, is cinematographer John Alton. Alton was, of course, the king of noir cinematography and I, the Jury is a hell of a good looking picture. Halfway through the movie, there’s a scene set in the basement of a library. Hammer is talking to a cop. In the background, another cop is smoking a cigarette, his smoke curling up into a hot white light above him. It’s just one gorgeous noir visual, causally tossed off, but Alton has packed the film full of them.

The other major selling point of the film is the fine performance by Peggy Castle as the sexy shrink, Charlotte Manning. She has the exact combination of aloof beauty and devious intelligence that the role calls for, and one wonders what she might have done opposite a decent actor in the lead role. In any event, 1953 was a good year for Castle, in addition to this film she also appeared in Karlson’s masterpiece 99 River Street. Sadly, though, she didn’t have many good years left. She made some more noirs, usually as femme fatales (including another Spillane adaptation, the ode to misogyny The Long Wait), did some television and then retired from acting. After her Hollywood career, she fell on hard times and drank herself to death at the age of 45, another tragic story from the land of sunshine.

Postscript: I’ve always thought the natural actor to play Hammer would have been Robert Ryan. Hammer is essentially a sociopath, and Ryan could have done interesting things with this interpretation of the character. You could look at his performance in On Dangerous Ground (1952) and see what I mean.

Spillane wasn't my favorite writer, but he was a hell of a good interview. Check him out here talking about his work and the writing business in general.

I recently managed to get a bootleg DVD of this from a dealer on Ebay who specializes in out-of-print items like this. Not the greatest picture or sound quality, and you can tell watching the opening credits the right edge of the picture is cut off... but it's a HELL of an upgrade from the miserable videotape I recorded off a late-night commercial station decades ago.

You know how they say your first is your favorite? Well, I came in with Stacy Keach, and tracked down nearly every Hammer out there before seeing this. To my astonishment... THIS-- THIS!!! -- has become my FAVORITE version of Mike Hammer.

Biff Elliot (who I first saw as the ill-fated "Shmitter" on the 1st season STAR TREK classic "Devil In The Dark") somehow to me embodies Hammer better and more authentically than any other actor I've seen play the role.

Preston Foster makes a great Pat Chambers, a guy who in one breath warns Mike to tone it down, while simultaneously supplying his pal with a list of suspects to check out, knowing Mike will do a more thorough job than he could as a cop.

And Margaret Sheridan-- the REAL star of "THE THING FROM ANOTHER WORLD"-- oh my God! She became my FAVORITE Velda, beating out even my long-favorite Tanya Roberts.

The rest of the cast are terrific, especially Alan Reed (alias "Fred Flintsone") and Elisha Cook Jr., who performs a trifecta for also having been in a Sam Spade and a Philip Marlowe film. I don't for one second believe "Bobo" was ever a member of the gang-- he was murdered and framed... but only after he gave Mike the clue he needed to identify the serial murderer.

Then there's The Brill Building-- scene of so many classics like "Demon With A Glass Hand" on "THE OUTER LIMITS"... or James Garner's office in "THE LITTLE SISTER" (alias "Marlowe"-- hey, Marlowe & Hammer were neighbors!).

I couldn't figure out this mystery. HAMMER DID. What a guy! Totally honest, loyal and incorruptible.

The REAL crime is that Spillane licensed out 3 Hammer novels to Parklane, and somehow they had 3 completely different production teams and casts of actors do them. ALL 3 should have had Elliot, Foster & Sheridan!! They were THE BEST by a mile.