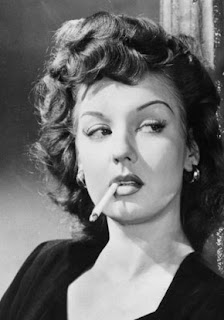 In 1945, a Z-list studio called Producers Releasing Corporation (PRC) gave director Edgar G. Ulmer six days and thirty-thousand dollars to make a movie. PRC was just one of the many low rent outfits on Hollywood's "Poverty Row" churning out bargain basement movies to stick at the bottom of crappy double features around the country. The studio assigned Ulmer a little script, a no-name cast, and a deadline. The movie he delivered a week later was as hard and cheap as a bucket of nails. And it was a masterpiece.

Detour is sixty-seven minutes long. It stars actors whose careers were in the toilet (a toilet soon to be flushed), and its lack of a budget is apparent in every scene. Yet these constraints seem perfectly suited to the story Ulmer is telling. Detour, which is about as noir as a film has ever been, tells the brief story of the destruction of a penniless loser. He starts out as a penniless loser; that’s at the beginning, when things are good.

The movie stars Tom Neal as Al Roberts, a down-on-his luck piano player in love with a down-on-her-luck singer. The singer heads west for California, looking to hit it big. She doesn't hit it big, but after a while Roberts follows her out there anyway. His career is going nowhere, and he's broke, so he has to hitchhike. He accepts a ride from a traveling salesman. The guy talks too much, and he's kind of an asshole, but hey, a ride's a ride. It beats walking.

Then something terrible happens. The guy up and dies, and though it's not Al Robert's fault, it sort of ends up looking like it is. He makes a spilt decision to leave the body in the desert, take the man's car, money and clothes. It's not a good idea, but neither is giving a ride to a hitchhiker the next day.

Her name is Vera, and when Vera climbs into the car with Al Roberts, the movie goes from being a cheap, effective little thriller into being something darkly wonderful. Vera, played brilliantly by Ann Savage, may well be the meanest woman who ever stomped into a film noir. She's not a beautiful seductress like Jane Greer in Out of the Past, or a bored housewife like Audrey Totter in Tension. She's not pretty. She's not sexy. She's a drunk who hates everyone she meets. She's not smart either, but, then again, you don't exactly have to be smart to be smarter than Al Roberts. She sees through him the moment she meets him, and then she decides she owns him.

I won't write any more about the plot, but I don't have to really. One of the interesting things about Detour is the way it begins to set up a plot complication at about the forty-five minute mark (Vera hatches a scheme to make some big money) but then veers off. The movie doesn’t need anymore plot complications. Al and Vera aren’t made for plots. They're too small time for that. They spend the last fifteen or so minutes of the movie swilling liquor and arguing in a dank little motel room, just a couple of cockroaches scurrying across the grimy carpet until one of them dies.

With such a tight focus, a lot depends on the performers. While Tom Neal was never much of an actor (he’s a total nonentity in something like Blonde Alibi), he had a quality of innate insecurity that worked well for the character of Al Roberts. Ulmer uses Neal’s eyes and their intrinsic worry in a recurrent image in which he zooms close to the actor’s eyes and lets the rest of the screen, including the rest of his face, go dark. It’s a cheap effect, but it works in large part because Neal had interesting eyes. Presumably they got more interesting, but Neal eventually stopped acting and opened a lawn care business. He was just another washed-up actor who drank too much until 1965 when he shot his third wife in the back of the head with a .45. He was released from prison after serving seven years and died of a massive heart attack within a few months. It’s a hard life story but oddly fitting for an actor immortalized by Al Robert’s lamentation, “Whichever way you turn, fate sticks out its foot to trip you.”

As good as Neal is here, however, the film really belongs to Ann Savage. She doesn’t appear until about the halfway mark, but that is merely a testament to the impact of her performance. With the character of Vera, Savage boils down the femme fatale to pure psychological grit. Vera’s not beautiful and she’s not brilliant, but she is tougher than Al Roberts. So she’s going to push him around, pure and simple. It is one of the great performances in film noir (hell, I think it’s one of the great performances in cinema), but it couldn’t save Savage’s career. Like Neal, she quit acting not long after this film and disappeared from the public view. For years, people assumed her life had ended as tragically as Neal’s, but in the eighties, she began to resurface in small parts in small films, and, happily, by the time Detour became regarded as a classic she was able to enjoy the delayed fruits of her success. Most recently, she appeared in Guy Maddin’s wonderful, surrealist My Winnipeg, playing a character who could have easily been related to Vera. Her career is a testament to the way a great film—even a cheap little monster like this one—can endure.

Detour is noir stripped to its bare essentials. It may not be the best noir ever made, but it's the purest. A man, a woman, a few bucks, a couple of nights, liquor, cigarettes, death. Maybe it's fate. Maybe it's bad character. The only thing for certain is that it doesn't matter.

That's the nihilistic heart of the genre.

I found out this afternoon that Ann Savage died in her sleep a few days ago, on Christmas. It's sad, and a real loss to movie fans, but one very happy thought is that Ms. Savage lived long enough to see herself remembered. I highly recommend Eddie Muller's excellent book Dark City Dames, which features a long section on Ann Savage. The story of how she discovered, after living for decades in absolute obscurity, that she was a cult figure--that without knowing it she was still a movie star--is a priceless bit of reading.

Here's a brief interview with Savage from a documentary on Ulmer. At the end of the interview there's a brief bit where someone says they shot "Detour" in fourteen days. Every single source I've read on the making of the film--including Muller, Bogdanovich, and both Ulmer and Savage--all say it was shot in six.