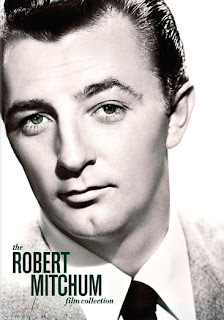 Could there be any sweeter four words than Robert Mitchum Box Set?

20th Century Fox is putting out a ten film collection on October 9th. The films included are:

THE NIGHT OF THE HUNTER
RIVER OF NO RETURN
HEAVEN KNOWS, MR. ALLISON
THE ENEMY BELOW
THUNDER ROAD
THE HUNTERS
THE LONGEST DAY
MAN IN THE MIDDLE
WHAT A WAY TO GO!
THE WAY WEST

Not a bad group of flicks. THE NIGHT OF THE HUNTER is the only full-on masterpiece, but RIVER OF NO RETURN and HEAVEN KNOWS, MR. ALLISON are worthy parts of any Mitchum collection (RIVER features Marilyn Monroe and was directed by Otto Preminger, while HEAVEN co-stars Deborah Kerr and was directed by John Huston). THUNDER ROAD is a cult film about bootleggers and was produced and co-written by Mitch himself. I wish I could say it was great, but although it was a deep south drive-in smash hit, I have to admit I think it's something of a slapdash affair. A weak supporting cast and lots of cheap back-projection chase scenes.

THE ENEMY BELOW and THE HUNTERS are a couple of okay military thrillers directed by Mitchum's fellow noir icon Dick Powell.

THE LONGEST DAY finds Mitchum among an all-star cast (John Wayne, Henry Fonda) in Darryl F. Zanuck's epic recreation of D-Day. Well done, if you like that kind of thing.

WHAT A WAY TO GO! finds Mitch among an all-star cast (Paul Newman, Dean Martin, Shirley MacLaine) in a black comedy about a woman whose husbands have a way of dying on her. Not bad, if you like that kind of thing. MacLaine and Mitch have good onscreen chemistry together, the result of their good offscreen biology...

THE WAY WEST and MAN IN THE MIDDLE were a couple of flops. The former is better than its reputation, while the latter is lumpy mess with a apathetic turn by Mitchum.

All in all, not a bad set. The films are all from the middle period of Mitchum's career, so with the exception of NIGHT none of his noir work is here. Still, ten flicks with Sleepy-Eyed Bob is always great news.

Just for fun, here's the Mitchum set I'd put together if I could:
OUT OF THE PAST
WHERE DANGER LIVES
ANGEL FACE
THE NIGHT OF THE HUNTER
BLOOD ON THE MOON
PURSUED
WHEN STRANGERS MARRY
CAPE FEAR
EL DORADO
THE FRIENDS OF EDDIE COYLE

It's too bad that MAN IN THE MIDDLE has to be included in the set. I'll buy it anyway, but I'm far less kind to that one than you've been. Thanks for the heads up!