Reflections on STREETS OF LAREDO (1993) 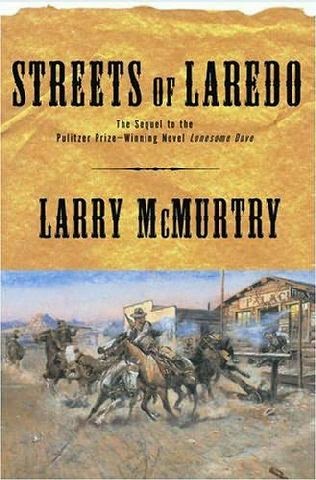 I wrote an appreciation of Larry McMurtry's LONESOME DOVE a few years back for Criminal Element. One of the points I made was that the success of that book and its sequel, prequels, and film adaptations have long since become a kind of cross for the author to bear. McMurtry did not set out to write the kind of blockbuster that would eclipse all his previous (and subsequent) successes, but that's pretty much what happened. For better or for worse, Larry McMurtry is known for being the guy who wrote LONESOME DOVE.

Since that book is a masterpiece, we will have to temper our sympathy for McMurtry by observing that most authors would kill to have written a book half as good as LONESOME DOVE. It's a brilliant work--sad, exciting, deeply realized, and ultimately haunting.

Allow me to suggest, however, that its sequel, STREETS OF LAREDO is a fascinating novel in its own right. It's a dark book--outside of Cormac McCarthy it is perhaps the darkest novel of the American west that I've ever read. And it does McCarthy one better by being far sadder than any book that notorious downer ever wrote.

I hasten to add that part of the brilliance of STREETS OF LAREDO is that, despite the sadness of its story, it is a hypnotic pager turner. McMurtry is a master at assembling and moving a giant cast of characters with action, grace, and humor.

To understand the original LONESOME DOVE, one must understand that McMurtry never wanted to write a proper saddles-and-spurs shoot 'em up Western. He set out to write a novel about the west. Of course, he was too good at making it move, too good at capturing the ethos of physical bravery and personal loyalty. For all the darkness of the book, it gave us characters whom we could admire. STREETS OF LAREDO does the same thing.  Half the novel concerns the women whose lives are directly impacted by Captain Call's mission. Joey Garza's mother Maria Garza is locked in a twisted Oedipal battle with her son. And Pea Eye's wife Lorena is, in her way, as strong and decisive as Call. Maria and Lorena are both frontier women--brutalized by life (which means, mostly, being brutalized by men) but unbroken and unbowed. Of course, this being a McMurtry novel no one is purely a hero, but between them Maria and Lorena manage to hold civilization together.

Ultimately, however, the novel is about loss and age, about moral and physical failure. This is not the last sterling adventure of Woodrow Call, this is the story of his undoing. He is, as Lorena observes, just a tired old killer. The novel finds him in the twilight of his powers, as he slips from being the man he was (or considered himself to be) to being a crippled shadow of that man. It is a brutal portrait, really--a way for McMurtry to drive home the point he wants to make about the myth of the West--that it was based on violence and racism and greed and all the unquestioned assumptions that make such evils possible. It is also, one suspects, the author's way of clarifying the meaning of LONESOME DOVE, which he felt got lost in the hoopla of its success: that bravery and cruelty were found on all sides in the story of Texas. The clash of cultures brought out the best and worst of men and women. And that's why STREETS OF LAREDO--Call's last ride--takes its title from the famous cowboy lament about death and the futility of human striving. McMurtry quotes the song in the novel's epigraph: "We all loved our comrade, although he'd done wrong..."
at 2:52 PM

Earn free satoshis over at Easy Bitcoin. Up to 33 satoshis every 10 minutes.