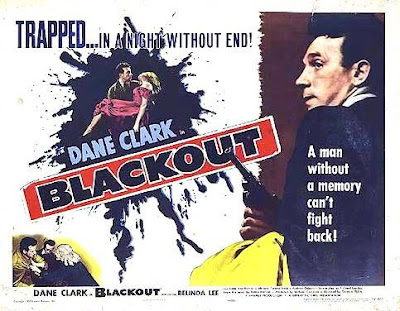 In the late fifties, the small, British-based film production company Hammer Films shot to fame and fortune with a series of low-budget horror flicks. The director at the helm of most of these groundbreaking gorefests (THE CURSE OF FRANKENSTEIN, DRACULA, THE MUMMY) was a talented workhorse named Terence Fisher, Hammer Films’ own resident Michael Curtiz. Churning out horror flicks quickly and efficiently made Fisher’s name in the business, but often overlooked are the impressive series of film noirs he made upon first arriving at Hammer in 1952—a few years before the company went fulltime into the monster business.

The best of these Hammer/Fisher noirs is probably the little seen BLACKOUT. The film stars Hammer-noir regular Dane Clark as Casey Morrow, an American ex-serviceman living in London after the war. When the film opens, Morrow is spending his last few pounds getting sloshed in a nightclub. He’s on the verge of passing out when he’s approached by a beautiful young woman named Phyllis Brunner (Belinda Lee) who makes this barely conscious drunk a pretty attractive deal: she’ll give him 500 pounds if he’ll marry her immediately. Morrow accepts her offer, and the next thing he knows he’s waking up in a strange apartment with blood on his coat. Phyllis is gone, but the morning papers report that her father has been murdered. 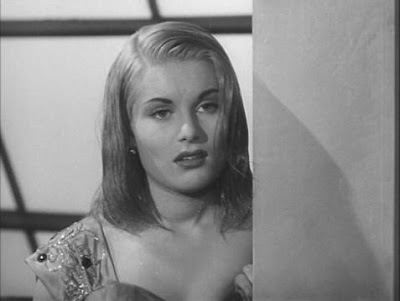 This is a wonderful setup for a noir, and the whole thing is rendered with great style. Walter “Jimmy” Harvey—the cinematographer for most of Hammer’s crime pictures—shoots the film in a hard black and white that manages to be starkly realistic in some scenes (like the opening in the bar) and Expressionistic in others (such as a later scene between Clark and Belinda on a rooftop). Meanwhile, Terence Fisher keeps his film moving even as his plot begins to make less and less sense. By the end, the plot makes basically no sense whatsoever, and BLACKOUT emerges as the kind of movie that feels like it was written during a real life blackout.

So, okay, the movie is an exercise in style over substance (another way in which Fisher’s work during this period resembles the snappy, sometimes shallow, efficiency of Michael Curtiz), but there are far graver crimes for which a director can be guilty. BLACKOUT is fast, atmospheric and like most Hammer productions it’s stocked with good actors. Dane Clark brings his likable everyguy quality to Morrow; the impossibly beautiful Belinda Lee is great as the maybe-she-is-maybe-she-ain’t femme fatale; and they’re backed by an uniformly top-rate supporting cast headed by Eleanor Summerfield.

The Hammer noirs of the fifties are a British cousin to the American noirs of the same period. While they did not produce a masterpiece on the level of an OUT OF THE PAST or an ACT OF VIOLENCE, as BLACKOUT makes clear, they are a hell of a lot of fun.