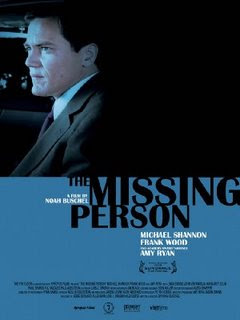 Here's a modern day film noir fresh from the Sundance Film Festival. The Missing Person stars Michael Shannon as an alcoholic private detective hired to trail a man on a train from Chicago to LA. He slowly figures out the man's real identity as a missing person, one of the people presumed dead in the World Trade Center Attacks on September 11th. The film costars Amy Ryan and Frank Wood and was written and directed by Noah Buschel. The Missing Person is still making its way through the festival circuit and has yet to make it to DC, but I'm hoping to check it out sooner rather than later. The preview looks interesting, and I've been a fan of Shannon since I saw him in Before The Devil Knows Your Dead and a fan of Ryan since Gone Baby Gone. Getting these two together in a neo noir is a damn fine piece of thinking on someone's part.