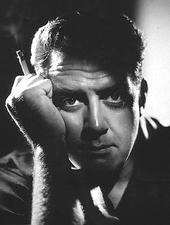 In our time we all play different parts, and just about every noir player has played the hero and the villain, the good girl and the femme fatale, the lead and the support. Yet over a career there are certain personalities that take hold. This is another addition to the roundup of faces that appear over and over in noir, like thugs pulled into a police lineup:

Long before he was Perry Mason, he put that blank stare and understated delivery to work as a supreme villain. He had a palpable intelligence that sent one message: It is your great misfortune that I am smarter than you. He appeared in many noirs but is especially notable as Lizabeth Scott’s stalker in De Toth’s brilliant Pitfall and as the brutal pyromaniac gangster in Anthony Mann’s Raw Deal. His best role might have been in another Mann picture, Desperate, in which he plays a vengeful gangster stalking poor Steve Brodie and Audrey Long in an attempt to save his brother from the gas chamber.

Here's an interesting piece on Burr's private life. He was so deeply in the closet most people today still don't realize he was gay.

Gale Storm died yesterday, and I wanted tip a hat to Abandoned the noir she made opposite Burr in 1949. Saying that Burr was good in this redundant since he was good in everything, but he gets to play a real scumbag in this movie. An added bonus: a three way fight between Burr, big lug king Mike Mazurki and goofball David Clarke.