Too Late For Tears Restoration 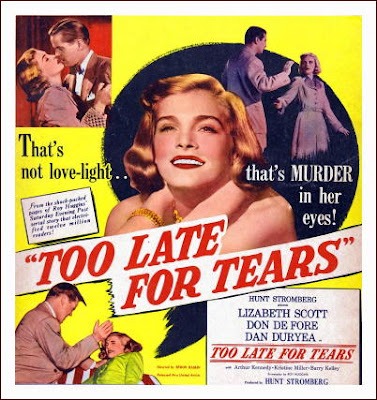 Some exciting news in the new issue of Noir City is the announcement that the Film Noir Foundation will be restoring TOO LATE FOR TEARS. This is thrilling news for three reasons:

1. TOO LATE FOR TEARS is one of the real forgotten masterpieces of film noir. I'd put it among the handful of truly great films in the genre. It features a career-best performance from Lizabeth Scott and stellar work from Dan Duryea. For more on the film itself, read here.

2. It's in rough shape. This is one of those films that's been kicked around the public domain for decades and treated like a piece of trash. It's in desperate need of rescue and restoration.

3. We've been close before. Rescue and restoration is a tedious business. Finding all the proper elements to snatch this film from the jaws of oblivion is hard work. America should give an award to Eddie Muller and the folks at the Film Noir Foundation for staying true to their mission. It's exciting to think that this film could be rescued while Ms. Scott is still with us to enjoy it.