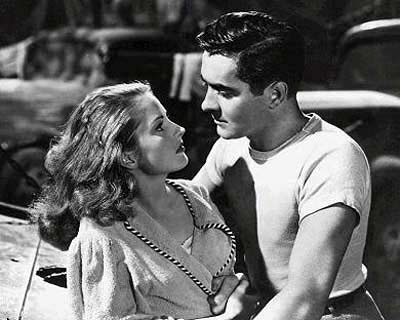 She could play the bad girl if she had to (her drug-dealing nurse is easily the best thing about the underbaked THE SLEEPING CITY), but Coleen Gray almost always played a dependable gal in a pinch. She tried in vain to steer Sterling Hayden away from his final doom in THE KILLING, saved what was left of Tyrone Power at the end of NIGHTMARE ALLEY, and she helped John Payne wade through a river of thugs in KANSAS CITY CONFIDENTIAL.

She got her first star-billing on one of the flagship noirs, 1947's KISS OF DEATH, serving as both narrator and star. Pretty almost to the point of unbelievably--in NIGHTMARE ALLEY she looks like a goddess--she exuded a certain playful innocence. She was the girl next door who probably wouldn't get boring after the honeymoon. Sadly, this quality wasn't recognized by the brass and despite being in a spate of fine films (she was John Wayne's lost love in RED RIVER), Gray was soon relegated to low budget crap like THE LEECH WOMAN. Her legacy as noir's premiere good girl, though, lives on.

Best of the rest: