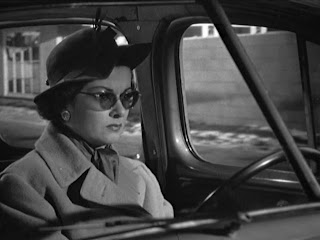 Most noirs are about men, and it’s easy to understand why. After all, most the talent working on these films, from the studio brass down to the technicians, were male. Look at most of the films made in Hollywood during the classic period (or indeed, all through its history up to and including today), and you’ll find that the films mostly center around the struggles of men.

This puts a special emphasis on films concerning women. In noir—where gender assumptions often play a large role in the plot—it is especially interesting to see a film that is not only about a woman, but is about being a woman. A shining example of this minigenre is Ophüls’ fascinating The Reckless Moment, which on the surface is a domestic thriller about a wife and mother who finds herself involved in trying to cover up a possible murder, but which underneath is asking some hard questions.

The movie stars Joan Bennett as Lucia Harper, a married mother of two living in a quiet coastal town in California. Without telling anyone where she’s going, one day Lucia drives the family station wagon down to Tahoe. She’s going to a cheap hotel to see a man named Ted Darby. He’s a shady character, all sleazy charm and insinuations, who has being seeing Lucia’s teenaged daughter, Bea. Lucia wants him to stay away from her daughter, so Darby smiles and suggests that he might be open to a little monetary persuasion. Lucia throws his offer back in his face, confident that when she tells Bea about Darby’s offer, the girl will end the relationship herself.

Lucia underestimates Darby, though. He calls Bea before Lucia can get to her and sets the girl against her mother. That night, he sneaks up to the Harpers’ waterside home and meets Bea in the boathouse. Bea’s no fool though, and soon enough she sees through Darby’s lies. A struggle follows, and in a complicated sequence of events, Darby ends up dying without Bea realizing what has happened. She goes back to the house, swears to her mother that she’s through with Darby and goes to bed. Early the next morning, Lucia goes for a walk down by the boathouse and finds Darby’s dead body.

It is at this point that The Reckless Moment becomes truly fascinating. Lucia disposes of the body, unsure exactly what has transpired, but suspecting that she is covering up her daughter’s murder. Once the body is found by the police, Lucia is the only one who knows what happened—up to a point, because even she doesn’t know exactly what happened. Things get worse with the arrival of a hood named Martin Donnelly (James Mason) who has some love letters written by Bea to Darby. He wants five thousand dollars (a heady sum in 1949) or the letters will go to the police. Donnelly is not a particularly good blackmailer—he’s clearly charmed by Lucia, maybe even oddly protective of her—but he’s working for a shadowy character named Nagel. Unfortunately, Nagel is a good blackmailer, and he’s not charmed by Mrs. Harper. He wants his money or Bea is going to wind up talking to the cops, her name all over the papers.


The Reckless Moment was directed by the great Max Ophüls, a man known for both his exquisite technique with the camera and for his sensitive treatment of female protagonists. In this film, both are on display. His tracking shots, which are more like tracking glides, were simply the best in the business. Many directors move their camera; Ophüls’ camera seems to float. If you only know his lushly romantic pictures like Letter From An Unknown Woman, you might wonder if his style could work in noir. That it works superbly is not so much a testament to how much Ophüls adapted to the material, as much as it is proof of how evocative and fraught with tension his style was to begin with. You can look at the first scenes in the movie—Lucia’s meeting in the sleazebag motel with Darby—and tell in an instant that you’re watching an Ophüls movie.


With this film, he delivered another of his great “women’s pictures”. He was working from a screenplay with a number of fingerprints on it, but most importantly he was working from a source novel by suspense writer Elisabeth Sanxay Holding. These days, Holding has been unfairly forgotten, but no less an authority than Raymond Chandler once called her “the top suspense writer of them all.” Her novel is a rich, dark story, and Ophüls seized on it as a way to tell the story of female entrapment in the postwar years.

Lucia Harper is boxed in by her family—her daughter, her son, her father-in-law, and even the mysteriously distant husband, Mr. Harper, at work overseas “building a bridge.” She loves her family (and the family clearly loves her), but that only makes the weight of her commitments to them all the heavier. In fact, Lucia’s chief difficulty in navigating the blackmail scheme is that her family is always watching her. She keeps stealing away to Tahoe. Strange men keep showing up at the house. Questions arise about money. Exasperated, at one point Lucia tells Donnelly, “You don’t know how a family can surround you sometimes.”

“You never get away from your family, do you?” he replies.


She stares out the window when she answers him. “No,” she says.

As Lucia, Joan Bennett gives a stunning performance, all the more stunning if you know her primarily as the sexy bad girl from The Woman in the Window (1944) and Scarlett Street (1945). To see her trapped in Lucia Harper’s world of tortured middle-aged motherhood and bourgeoisie asphyxiation might be a shock, but it’s a bigger shock how well she pulls it off. She sinks into this role, portraying Lucia as a frantic, unhappy, but ultimately resourceful woman. The film was produced by Bennett’s husband, Walter Wanger, and perhaps it was intended as a showcase for her acting chops. If so, it is one hell of a showcase.

Postscript: If the plot sounds familiar, it’s because the film was remade in 2001 by Scott McGehee and David Siegel as The Deep End. Their impressive remake stays remarkably close to the original, with the significant exception of changing the daughter to a son. This change is important and helps add a fascinating dimension to the story’s look at gender, yet I can’t help but feel that The Reckless Moment feels more authentic. The Deep End is a fine film—well acted and directed—but watch it alongside The Reckless Moment and a faint but certain anachronistic quality creeps out of it.

Jake, what a fine review and analysis. I have to get my hands on this picture.

this is gripping piece. Haven't seen the Reckless Moment for years but really want to !

Such a great movie. It's hard to find, but worth it.