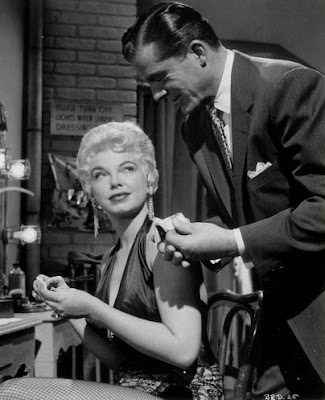 What a goofy movie. Beyond A Reasonable Doubt is one of those high concept thrillers that makes for a good ad campaign. It has an easy pitch: a man frames himself for a murder in order to reveal the flaws in the application of death penalty. Then something goes terribly wrong and suddenly he’s unable to clear himself. Will he go to the electric chair or will he find his way out of this mess?

The man in question here is a newspaper reporter turned novelist named Tom Garrett (Dana Andrews). He’s engaged to be married to Susan Spencer (a surprisingly spunky Joan Fontaine) the daughter of the newspaper’s publisher. Tom and Susan are all set to be married when Susan’s father, Austin (Sidney Blackmer) proposes that Tom do an exposé on the flawed criminal justice system. Austin is a fervent opponent of the death penalty, and he wants to show that an innocent man can be convicted of a murder and sentenced to die. He and Tom find a killing in the paper, the murder of a young stripper named Patti Gray, and set about framing Tom for the murder. They document their subterfuge in photographs—Tom posing with a current issue of the newspaper as he plants evidence to incriminate himself—and lock it away in a safe. They don’t even tell Susan what they’re doing—an odd way to treat your fiancé or your daughter, I have to say. It all goes according to plan. Tom becomes the main suspect in the case, he’s put on trial, the trial goes against him, and the politically hungry district attorney (Philip Bourneuf) is itching to send this high profile killer to the chair. Now, all that needs to happen is for Austin to reveal his evidence proving Tom’s innocence…

Which, of course, is where things go wrong for our intrepid reporters. I won’t discuss further developments in the plot, but let’s take a look at its absurdity thus far. I can’t help but note the insanity of the scheme hatched by Austin and Tom. Let me get this straight: they plan to manufacture evidence, lie under oath on the witness stand, and trick the justice system into a wrongful prosecution. Yeah. Good plan, guys. Do they also plan to go to jail for interfering with the investigation of a murder? Don’t they think the cops have better things to do than chase the red herrings of a couple of politically motivated newspapermen?

Beyond A Reasonable Doubt was directed by Fritz Lang at the end of his career in Hollywood (the famously prickly director wasn’t sorry to leave the town, and no one was sorry to see him go). The film has a curiously detached quality you sometimes find in Lang’s American work. Of course, there’s no doubting that he was an influential director, with films like M, Metropolis, and Dr. Mabuse to his credit, and there’s no doubting that his contribution to noir is substantial: Ministry Of Fear, The Woman In The Window, Human Desire are all good films. While I don’t love The Big Heat like a lot people, I do consider the best of his American films, the brilliant Scarlet Street, to be a masterpiece. And yet, having said all that, Lang could be a cold, distant filmmaker. If he had the right material, his chilliness proved an asset. Other times, his just felt unengaged. If the material was silly—as it is here—the resulting film is a none-too-enticing combination of aloofness and absurdity. Lang—who could be a vivid, striking creator of images—here creates a visually flat film with curiously little forward momentum.

Some of this might have been saved by performances, but Lang had a problem in his leading man. Dana Andrews was a fine actor capable of great subtly and intelligence, but in 1956 he was deep in the throes of a brutal battle with alcoholism. Andrews would eventually quit drinking, but in this film he’s paunchy and ineffective as Tom. The character is never easy to understand. Why would he sign up for this goofy experiment in the first place? This is a question that only begs to asked more at the end of the movie when everything is supposed to make sense. In the final moments, the film has a couple of surprises in store, but after you watch the film ask yourself: did those plot twists make things clearer or muddier?

A remake of Beyond A Reasonable Doubt starring Michael Douglas has just been released. I probably won’t be seeing it any time soon, but I wouldn’t mind hearing from someone who does.

I will admit to having a soft spot for this film. It is hardly up to par for Lang but it may just be my love of Dana Andrews.
The ending is just crazy enough to make it entertaining even though it makes you shake your head.

I've just installed iStripper, so I can have the sexiest virtual strippers on my taskbar.