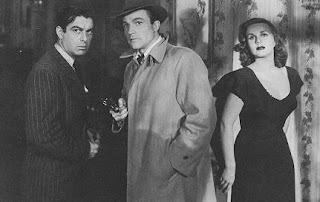 The holidays can be a depressing time, so it’s somewhat ironic that more film noirs haven’t been set during the silly season. The manufactured cheerfulness of Christmas—with the lights, incessant music and forced religious observance, not to mention the legitimate celebrations of family and faith—make for a rich contrast to the subversive world of noir. Capra employed some noir touches to both Meet John Doe and It’s A Wonderful Life, both of which are centered around long, dark nights of the soul. Allen Baron utilized New York’s Christmas celebrations in Blast of Silence, using the decorations and cheer as a backdrop for his ode to existential nothingness.

Perhaps the best example of a “Christmas noir” is Robert Siodmak’s Christmas Holiday starring Deanna Durbin and Gene Kelly. Adapted by Herman J. Mankiewicz from a novel by W. Somerset Maugham, it tells the story of a young solider, Lt. Charles Mason (Dean Harens) who is dumped by his fiancée (via telegram!) on Christmas Eve. He jumps on a plane to San Francisco to confront her , but when the plane hits a storm, the flight is rerouted to New Orleans. Mason is drinking his problems away in a bar until he can get another flight when he’s approached by a drunk reporter (Richard Whorf). The reporter takes pity on Mason and drags him to a nightclub (a thinly veiled brothel). There Mason meets a beautiful-but-sad young singer named Jackie (Deanna Durbin). They spend the night talking, with Jackie telling Mason the story of her life. Turns out her real name is Abigail Martin and her husband Robert (Gene Kelly) is in serving a life sentence for murder.

At this point, the film switches gears and tells the story of Abigail and Robert’s doomed romance. After the back story is filled in, we come back to Jackie and Mason just in time to find out that Robert has escaped from prison and is making his way to his wife. He’s not pleased that she has changed her name and taken a job in a whorehouse.

What an odd film this is. It’s takes a curiously long time to get to the story of Abigail and Robert, and Mason never really comes into focus as a real character with real problems (the film forgets about his two-timing fiancée pretty quick). The story of Abigail and Robert also feels somewhat undercooked. Theirs is an extremely dysfunctional relationship, with Abigail assuming the responsibility for Robert’s gambling and murder, and Robert letting her feel that she’s to blame. The film never confronts this imbalance of power in the relationship, and then at the end segues into a hasty bit of self-empowerment. Durbin had been the biggest movie star in the world in the late thirties but she was quickly approaching the end of her career. By 1949, she would be done with films, living happily secluded in France, refusing film roles and interviews. This film was an attempt to show that she had a range beyond light comedy and musicals, and she does a perfectly fine job as the conflicted Jackie/Abigail. The same can’t be said for Gene Kelly. Could anyone be more out of place in a story like this? Kelly was a man with a spring in his step and joy in his voice. The final moments of the film don’t work in large part because Kelly, at least as an actor, has no dark depths to plumb.

It’s too bad, too, because Christmas Holiday has its virtues, too. Don’t let the title and cast fool you; this is a full-fledged film noir. Set almost entirely at night—and photographed by the superb Woody Bredell—it’s a gorgeous-looking film with a good supporting cast. There are nice character parts for Gale Sondergaard as Kelly’s creepily devoted mother (the film should have made room for a showdown between Sondergaard and Durbin), and Gladys George as the proprietor of the “nightclub” where Durbin works. If anyone was born to play a Madam in a whorehouse, it was Gladys George.

Christmas Holiday is ultimately a failure of a film, but it is a fascinating example of how noir worked. Here’s a film starring two naturally ebullient singers, set during Christmas time, but through the handling of the material it paints a pretty bleak picture. Love in this film is something to be overcome, something that gives way to heartbreak and pain.

Happy Holidays from the city of perpetual night.

I love Siodmak films and oddly enough, I don't remember this film in his bio, though I remember a reference to Deanna Durbin. I'll have to give this a view and "Cry Of The City" when they come out on DVD.